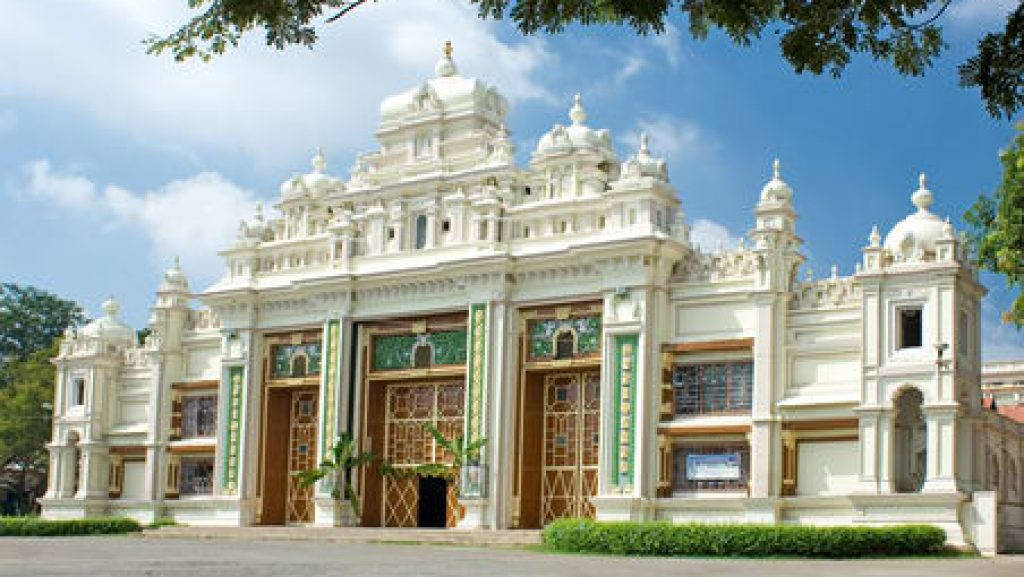 Ambling through the rooms and hallways of the Sri Jayachamarajendra Art Gallery, housed in the handsome Indo-saracenic building of Jaganmohan Palace, fills one with the beauty of 20th century artworks from across India. 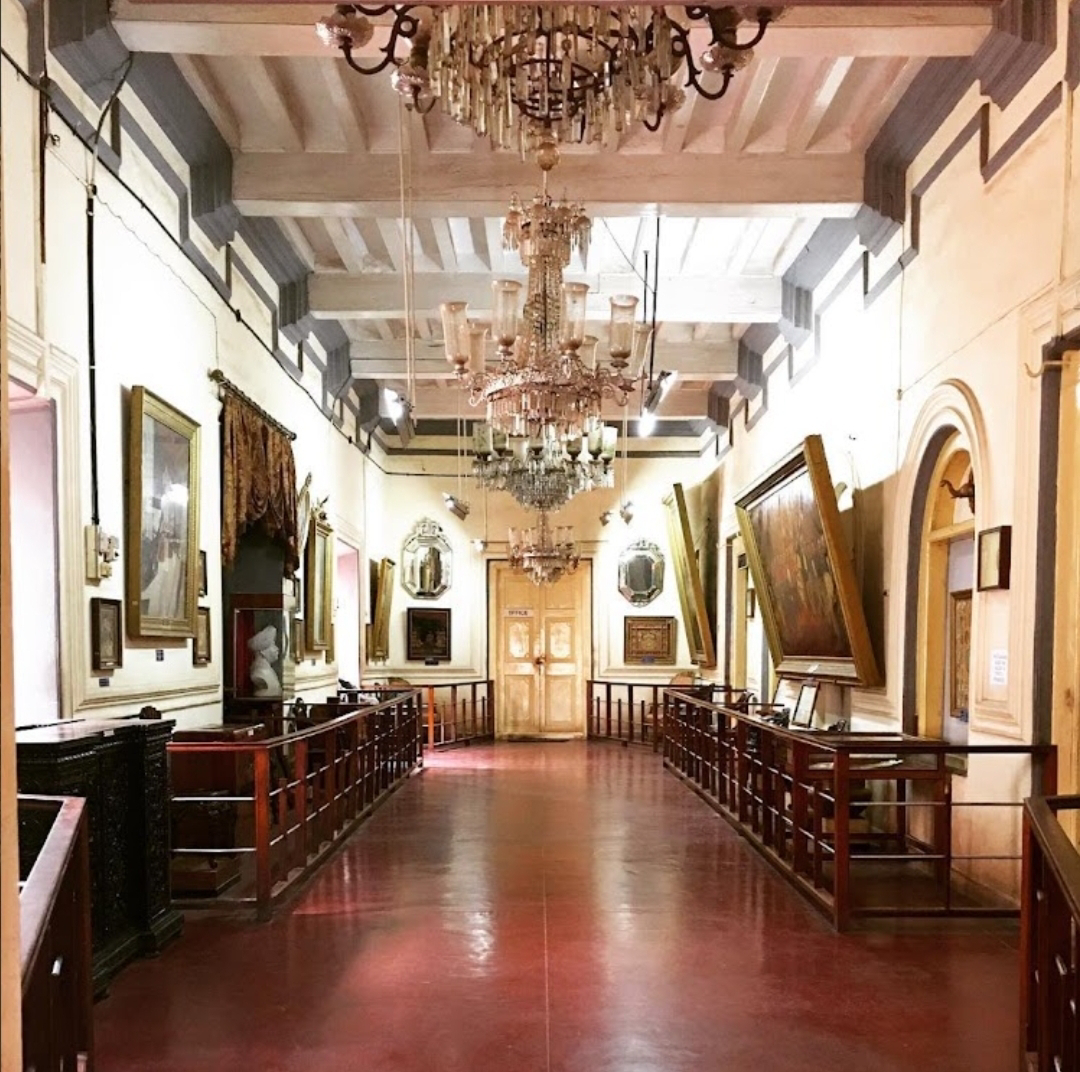 Artworks of Gaganendranath Tagore, Abanindranath Tagore, S.L. Haldankar, Nicholas Roerich, K. Keshavaiah, M. Ramanarasiah, G.L.N. Simha and many more stalwart artists grace the hallowed walls. Consuming the visual ambrosia as one reaches the second floor hall, the huge oil on canvases of Raja Ravi Varma overwhelms with its drama. Among the ten or twelve canvases of this artist par excellence, the 'Galaxy of Musicians' is unique. 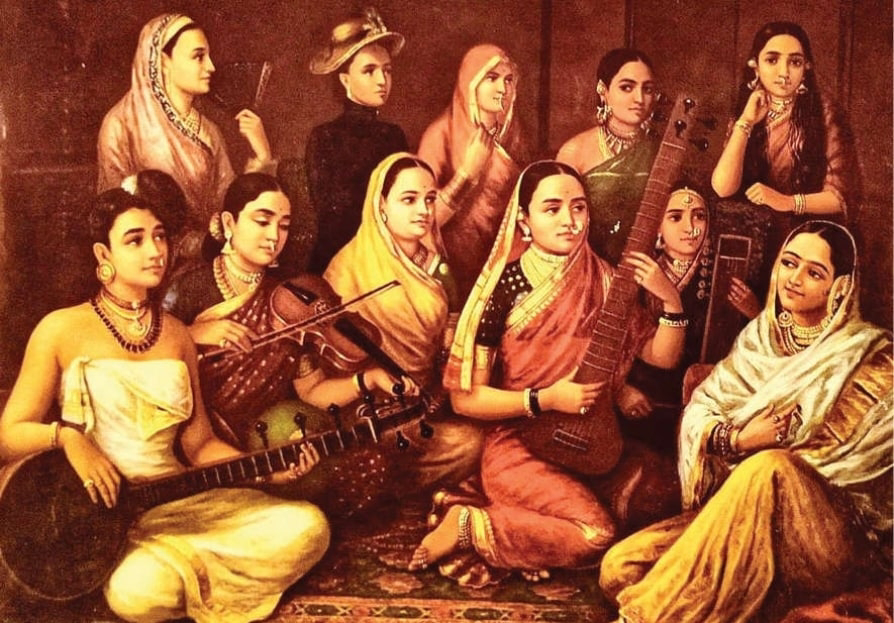 The composition reminds one of a group portrait. It strongly resembles a photograph of a group of female students of Maharani’s College contemporaneous with the painting. What differentiates the painting from the photograph, though, is the fact that eleven ladies in two rows, have been dressed in variety of costumes each representing different regions of India like Malabar, Tamil, Maratha, Lucknow, Parsi, English, Rajasthani, etc. Four of them are playing stringed instruments like a Saraswati Veena, violin, sitar and a sarangi, the Parsi lady is holding up a hand fan, the Lucknow girl looks like she is performing a thumri on kathak while others gaze out or towards the onlooker.
It seems like the artist’s favourite muses from across the length and breadth of the sub-continent have assembled within a frame decking up in their finest drapes and jewels. The essence of India through its feminine beauty has been depicted here, one might presume.
Probably Raja Ravi Varma was the first artist to symbolise Bharatmata in a composite portrait like this. He might have titled it as ‘Galaxy of Musicians’, but in reality he brought all the regions of India symbolically as the beautiful maidens and made them sing a common song of a single nationhood, a united and free India.
Posted by H.S. Dharmendra at Thursday, January 13, 2022 No comments:

Are you in my heart

or in my mind?

There's nothing on outside

Let me dive in and find.

Precious much is lost

in the daily grind.

Few slivers of your smile

is all that's left behind.

On and on and on

that was dead and gone...

After eons of cold solitude

What If Love Vanished From the Humanity

Have you ever wondered, what if ‘Love’ vanishes from the world and what happens then? There will be no love between a mother or father and the child, between siblings, between friends, between bloody absolutely anybody!

Nobody will fall in love. There will be no ‘lovers’ at all.

We will have admiration, respect, devotion, gratitude, fear and awe towards God but not love. Without love towards God, our devotion will be without soul. Humanity will lose its innocence. Love is the fuel of the soul and without this fuel the soul will seize to work and human beings will be like walking and talking machines.

Victor Hugo has quoted, "Life is a flower of which love is the honey." If there is no love, the flower is devoid of its sweet nectar and becomes just a good looking outer shell of colour and texture. Similarly, the human beings will be soulless, stone hearted creatures yielding to nobody.


The loveless world will be a gloomy place to live in. Nobody will care for anybody. The lack of empathy and care will result in widespread exploitation, distress and negativity.

Love is the glue that binds two hearts together. In the lack of this glue, each person will be lonely. There would be no sense of camaraderie, warmth and belonging. Families will not exist. Friendships will be a thing of the past. Partnerships will no longer be forged. Everyone will be lost. Each one will be alone.

"Loneliness might not seem like a medical problem, but it can impact overall health, as well as brain health. Stress from feeling disconnected and alone can result in depression, anxiety and even cardiovascular troubles like high blood pressure, stroke, and heart disease." - Brenda Kelley Kim


Just imagine the situation where everyone in the world is afflicted with loneliness and are depressed. It is indeed a scary scenario. It will be much worse than the current situation of COVID 19 pandemic that is sweeping the globe.

Worldwide depression is a bloody nightmare. If the doctors are also afflicted by this, who will treat others? There will be large scale suicides among the public. The violence will breakout everywhere. People will be on edge at all times. Domestic violence, murders, rapes, physical abuse, fights, road rage, all kinds of conflicts will erupt everywhere.

If the world leaders and their advisors are also stricken with a loveless, empathy-less and careless mind then it will not be long before someone among them will trigger a nuclear warfare. This, I am afraid, will lead humanity into total destruction of the world as we know it. It will be total annihilation of mankind along with the majority of the animal and the plant world.

‘Love’ may seem insignificant because it is just an intangible feeling. But the lack of it will sound the death knell to our very being. So it is in our best interest that love takes over the world and conquers all negativity.
Posted by H.S. Dharmendra at Tuesday, July 28, 2020 1 comment:


Tipu Sultan had a fascination for tigers which is evident in the repeated tiger motif in his swords, guns, throne, royal seats, royal flags, standards, etc.


One particular design motif derived from the tiger stripes recurs significantly in his dresses, upholstery, documents, architectural ornaments, etc. The way he has used these motifs is so uncanny to the modern ways of brand building in the capitalist world.


This motif is a simplified tiger stripe somewhat similar to the letter 'S'. It has got a unique name as well - 'Bubris'. This word is always used together with the word 'Tiger'. So it is 'Tiger Bubris'.


I was wondering since many years, since I came across the word and its meaning, as to the origin of the word. The problem was that I was pronouncing it as 'boobrees'. One day I was drinking coffee in the typical South Indian style with a stainless steel tumbler and its accompanying container which is called as 'Dabree'. I am fascinated with words which sound strange. So I was playing with the word 'Dabree' in my head when suddenly there popped the word 'Bubri' which was similar in sound.

It was an eureka moment. My confusion about the word got cleared in a second when I pronounced the word as 'Babree'.


In colloquial Hindi and Urdu, the tiger is called as 'Sher' (Sher is a persian word for lion). A strong and powerful male tiger in his prime is called as 'Babbar Sher'. So you can now see the connection clearly. Babbaree means 'of Babbar' (of tiger). Further, Babbaree has been anglicised as Bubri (singular) or Bubris (plural or collective).

So the final word is this - Bubris means the design motif of a tiger.

This is my hypothesis regarding the lexicological derivation of the word 'Bubris'.

Further, this design element did not die with Tipu Sultan in 1799. It has continued till today but shorn off its importance. Even today the Dasara elephants of Mysuru are covered with beautifully embroidered clothes on their backs which invariably have borders populated with bubris.

Bubris had captured the imagination of Mysureans so much that it endured few wars, a regime change and the merging of Mysore into the Dominions of India. It has remained as a silent testimony to the era of Tipu Sultan in the history of Mysore.
Posted by H.S. Dharmendra at Thursday, July 02, 2020 No comments:

Blowing My Own Trumpet 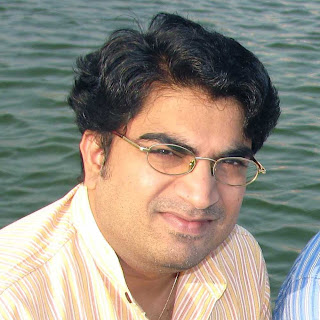 H.S. DHARMENDRA (b. 1976) better known as Raghu to friends and the art fraternity is a die-hard Mysorean. A product of Mysore University he holds a post graduate degree in Computer Applications and does the unimaginable. Raghu takes on the avatar of a designer of fine artefacts, dolls, traditional game-boards, game pieces, brochures, booklets and calendars for Ramsons Kala Pratishtana (RKP), the Mysore-based art foundation which hosts iconic events like ‘Bombe Mane, Kreedaa Kaushalya and Deepa Soundarya.’

In between he acquired a PG Degree in Fine Arts (History) which he admits adds a bit of colour and artistic depth to what would have been a bland rigmarole of life.

Raghu heads the Research section of RKP. His area of research includes traditional Mysore paintings, traditional dolls of India and traditional Indian indoor games. He also slips on the operatic cloak of an art historian when necessary and then with equal ease dons the mantle of a guest lecturer at Chamarajendra Government College of Visual Arts (CAVA) in Mysuru. 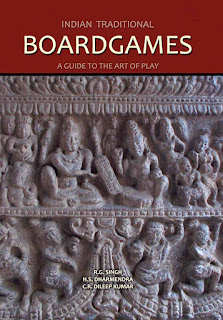 A Man of Many parts - Raghu!

He is also a co-author of the book, ‘Indian Traditional Board Games – A Guide to the Art of Play’, published (2016) by Ramsons Kala Pratishtana. As a part of the research, Raghu along with the RKP team spent hours and several days visiting scores of temples across the sub-continent to unearth the mystery of traditional board games etched in temple floors. The result was the informative book mentioned here.

On the occasion of opening of the "Ramsingh's Museum of Mysuru Paintings" (25-02-2020), an introductory book about the museum was released which was co-authored by Raghu and R.G. Singh. The volume was titled "Mysuru Chitra Siri" and it has been very well received for its contents as well as the introductory writeups about fifteen contemporary artists who practice Mysuru style. Raghu has designed both these books including their covers and layouts. 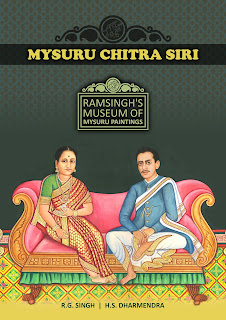 His dissertation for MFA – ‘Portraiture in Surapura and Mysore Paintings – A Comparative Study’ throws some interesting facts about the genre of portraiture in South Indian paintings and awaits publication.