Sri Rama - The Best Among Men

Me and my siblings have been fed with Ramayana, Mahabharatha and other stories by my granny since we were kids. She was a storehouse of myths, legends, Puranas and fairy tales. Like a TV soap opera she narrated the stories daily at bedtime and kept us five siblings from bothering our Mom. Thanks to her, though I haven't read the epics myself, I know the entire story and the characters in them by heart.

In Ramayana, the interesting part for me after the death of Ravana was the 'Agni-pareeksha' of Seetha. I was more fascinated with the miracle of fire not burning Seetha. The kid in me was engrossed in the fantastic nature rather than dwelling on the harsh realities. 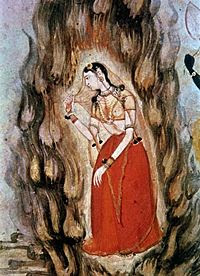 As time flew by and the stories became more real than fantasy, I started looking for human stories in these larger than life epics. Enquiry replaced wonder. Questions replaced blind belief.

I am a believer in God and my personal prayer involved Lord Sri Rama among few other deities. But since couple of years I am unable to think of Sri Rama as my ideal, because he betrayed Seetha. He left her high and dry when she needed him the most.

During the hindu wedding rituals, the bride and groom take a vow, of togetherness, with sacred fire 'agni' as the witness. Rama married Seetha by promising in front of 'agni' that he will always be there with her in happiness or illness, taking care of her well being.

He went to great lengths to keep the word of his father, but when it came to himself, he turned a blind eye, abandoned the promise made in front of 'agni' and casted away a pregnant Seetha into the wilderness to the mercy of wild beasts.

To fulfill his father's promise, Rama went into exile for 14 years. He was supposed to go alone, but Seetha followed him when she, instead, could've opted to stay in the palace. She endured the hardships just to be with her beloved. She was kidnapped by Ravana and suffered great misery but the hope that Rama will come and rescue her saw her through that misery. Surely Rama came, fought Ravana and killed him only to plunge Seetha into the fire.

Rama, who once with the mere touch of his toe relieved Ahalya off her curse, now wanted Seetha to convince him of her chastity and asked her to purify herself by entering the fire. Even fire couldn't harm her and Rama, now convinced, took her back, returned to Ayodhya and was enthroned. All's well that ends well, we thought, until a washerman cast aspersions on Seetha. That's it, Rama had to dump Seetha at any cost because one of his subjects doubted the queen.

Seetha, who was pregnant at that time is not even given an explanation or a hint about what was coming her way. The least suspecting Seetha is taken to the edge of the forest and dumped there unceremoniously.

For Rama, the word of his subject is far more important than the word he had given his wife during the wedding; by sending away Seetha he was only endorsing the view of the washerman. If he was so much concerned with the washerman's words, he could have abdicated the throne, but no! He would rather dump his wife than give away the throne.

(I wrote the above verse on 28 November 2008 and since it echos the same question as in this post, I am including it here. You can read this and many more of my Kannada verses here.)