After staking claim to the throne of Karnataka empire and called himself ''Karnataka Ratnasimhasanadheesha' in 1610 CE, Raja Wodeyar first conducted Darasa celebrations; he least expected for the tradition to endure for 400 long years.

Cut to 2010. Secretary of Ramsons Kala Pratishtana (RKP), R.G. Singh is frustrated that nobody is taking cognizance of the importance of Dasara 2010. He tries to explain the significance of the 400 years of Mysore Dasara to few but to no avail. 'Charity starts at home.' He decides to make a difference himself. RG then asked me to design a logo to commemorate 4 centuries of Mysore Dasara. He told me that we shall use the occasion to be the central theme at this year's 'Bombe Mane' and also use the logo for the same.

So I sat one fine morning in front of my computer system with a blank mind and monitor. No idea was forthcoming. So I relied on a pen and paper instead. I wrote '400' as it is and a little bolder. 400 is a big quantity when you are talking about years, so I decided to make '400' the central design of the logo. The next question was to depict the spirit of 'Dasara' in the logo which has to be something that is easily recognisable by one and all.

It didn't take long to decide upon 'Jamboo Savari' (elephant carrying golden howdah) which is the most apt image that conjures up Mysore Dasara in our minds. But how to depict Jamboo Savari and also '400'? Next I made the '400' thicker still until the digits were sticking to each other. Lo! it looked like an elephant to me. I scribbled the silhouette of the howdah on top of it, made two human figures seated inside and a mahout. To make '4' look more like an elephant's head I added tusks and finally scribbled a tail onto the second '0'.

The rough draft was ready and I showed it to RG and MB Singh, the Executive Trustee of RKP. I redid this concept in Coreldraw with few editing in Photoshop. After a few tweaks, the logo was ready. Here it is... 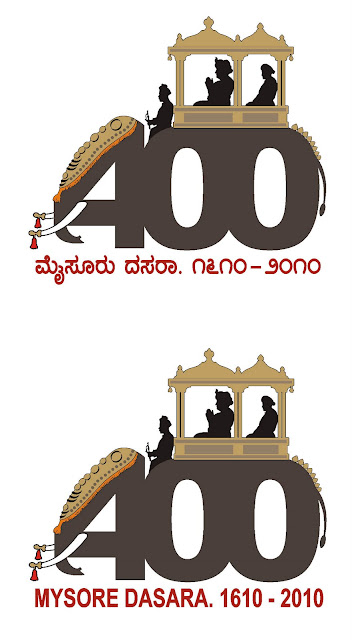 When I asked RG what made him to have a logo for this occasion, he answered me that in a country of one billion people and thousands of cities, only a handful can boast of such heritage and Mysore is one among them. He added that whatever we do with love towards it is a tribute to Mysore.
Posted by H.S. Dharmendra at Thursday, September 23, 2010 13 comments:

To See or not to See the Moon

Today is Ganesha Chaturthi, the festival of Ganesha. In many homes across south India (including mine) in the states of Andhra Pradesh, Maharashtra, Karnataka and Tamilnadu, the lovable, pot-bellied, elephant headed Ganesha is welcomed and offered 16 course worship (shodashopachara). He is welcomed, offered seat, water, food, clothes, music, love and devotion and finally bid farewell.
It is said that when Ganesha was travelling on his mooshika vahana (the mouse vehicle) with a big belly after a heavy lunch, the mouse toppled over and Ganesha fell down. It was a night lit up by a gorgeous Moon (Chandra). Looking at the scene below, the proud Moon couldn't contain his laughter and burst out cackling. Ganesha felt insulted and in a fit of rage cursed Moon to loose his charming beauty. But after much coaxing by the entire pantheon of gods, Ganesha watered down his curse. He said that whoever looks at the Moon on the Bhadrapada Chaturthi (the day on which Ganesha chaturthi is celebrated; i.e., today), he/she will be a victim of vicious and false accusations for the entire next year. So Hindus usually avoid looking at Moon on this day.
Coincidentally, today is also finale of Ramzan (Ramadan). For Muslims the festivities of Qutb-e-Ramzan, after the month long fasting during Ramzan, is heralded by looking at the faint crescent of Moon. So until and unless they look at the infant Moon, they will not partake in festivities.
So, today at one side you have Hindus who are deliberately shunning a glance at the cursed Moon while on the other side you have Muslims celebrating the vision of a delicate Crescent. This is the irony of faith.
Posted by H.S. Dharmendra at Saturday, September 11, 2010 No comments:

Can Someone Invent This - 1

Many a times I have thought about things that could be invented and thought 'why nobody has tried to invent such a thing?' This will be a regular column in my blog and I will keep posting my various ideas under the same heading appended with successive numbers.
My first idea:
A light bulb (or similar contraption) which will be connected to a bunched-up optical fibre cables whose other end will be connected to a dish-antenna-kind-of mirror (this can be made to track the sun, a device invented by Pranav Mistry) which is installed on the terrace of the building. The sun-light falling on the mirror will travel through the OFC bunch and will illuminate the bulb on the other end.
This way we can stop the usage of electricity to illuminate the interiors during day time.
I appeal to scientists to come up with such a thing.
Posted by H.S. Dharmendra at Friday, September 10, 2010 No comments: