I was studying 8th standard at JSS Balajagath. Ms. Nalini was the school head mistress and also taught us English. She was known to be strict and was feared by all students.

Our class consisted of nineteen; I was one among the brightest in that small group, good in languages, including English. During one of the monthly tests, the English question paper required us to build one sentence each to ten given words.

I did well in the test and when it came to the sentence building task, I was excited. I wanted to flaunt my language skills and wrote sentences incorporating names of two of my classmates - Aruna and Chandrika - in all ten sentences. I was confident that the teacher will appreciate my creativity.

On the day of results I was beaming with confidence. The teacher walked into the class room with answer sheets. She announced each student's result by turn and when she came to me, blurted out...

'Dharmendra is so much attached to Aruna and Chandrika that he has referred them in all ten sentences.'

Suddenly, I felt as if I am nude in front of everyone, but the ordeal was not over yet. Aloud and sarcastic, she read each of the ten sentences with pauses and commas.

A sharp flame of shame seared through my being. I was red in face and squirming in my seat. Inspite of forming flawless sentences, I was humiliated in front of the whole class. I was confused and angry. I sat there embarrassed, helpless and perplexed, licking the wounds.

Whenever I remember the incident, I feel embarrassed all over again.
Posted by H.S. Dharmendra at Sunday, November 26, 2006 9 comments:

Whenever I drive through Devaraja Urs Road, Jhansi Lakshmi Bai (JLB) Road, Metropole Circle, etc., a look at the boards and hoardings there and my blood boils. Many of them have been defaced with black tar mercilessly.

Some Kannada fanatics with twisted minds have formed a group, they come out in the black of the night wielding brushes tied to a pole and carrying a bucket of black tar. They stalk the main roads of Mysore looking for English name boards of the shops. Within minutes neat, beautiful and colourful boards are smeared with black tar ruining it once and for all.

These hooligans neither have regard for other person's property nor towards the aesthetics of this heritage city and by doing such heinous act they bring shame to the city. This vandalism is not unique to Mysore but it is widespread in Bangalore too.

I suppose persons carrying out this criminal act think that they themselves are courts and justice systems on the move. Any board written in English is a criminal for them; they give instant justice and the punishment is a smear of tar on that culprit board or hoarding. When sun shines on these boards next day, it is nothing short of a shock to the proprietor of the shop.

God save the shop keepers when these self proclaimed mobile justice groups take to streets in broad daylight. They act like cheap goondas and literally force shopkeepers to change the boards. If the shop keeper is adamant enough, then the group's justice is swift and harsh, they pelt stones, pebbles and shatter glass panes causing damages amounting to thousands of rupees. Who will pay for all the damage done?

Destroying other's property is a crime. But the people who are committing these crimes are law unto themselves. Looking at the inaction of police one is forced to believe that they have deliberately turned a blind eye to this criminal act. Hello! Mysore police... rise and shine, smell the filter coffee.

The board-vandals are not doing a great service to Kannada as they proclaim, but instead they are insulting Kannada and Kannadigas. I am a Kanandiga. I love Kannada. But I am ashamed of the acts of these lunatics who claim to be saviours of Kannada. I am afraid if they are not stopped well in time, then they will perpetrate crime in the name of Kannada, like what Taliban did in Afghanistan in the name of Islam.

Winding through the Hebbal industrial area, a peach coloured edifice with shimmering steel-gray glasses and contemporary architecture became visible, as our car rolled into the sprawling 230-acre campus, involuntarily I exclaimed 'Wow'! Perfectly laid and asphalted roads flanked by beautifully manicured lawns, tall, dark and handsome lampposts; my sister's Barbie doll’s flawless garden invariably came to my mind. For a moment I thought I have been transported from a world of chaos to an island of bewildering order.

Welcome to the truly world-class facility of Infosys Technologies Limited's Mysore Development Centre, 'My DC' as the Infosians here like to call it.

'Transforming business through integrated technology solutions' - this mantra aptly describes the goal of this software conglomerate, which has about nine Development Centres in India and approximately 70-80 offices across the globe with a work force of more than 13,000 employees of all nationalities.

The tea was served at the Infosys Leadership Institute, which has been built conforming to international standards. Soft sounds of water playing on granite fountains welcomed we visitors. 'Ranganathittu', 'Bandipur' etc are some of the names that are given to conference rooms here.

Promptly at 5.30 p.m. we were taken around the entire premises starting from the food-court. A lush green cricket ground sits snugly beside the food court from where almost a 1000 and odd crowd can watch the game and enjoy the food at the restaurant. A recreational wing, inside, houses a state of the art gymnasium, Table Tennis room, a Billiards & Snooker room and a rest room catering to the employees with a motto to keep them physically fit and thereby assuring their mental alertness. An ATM is also installed for convenience. 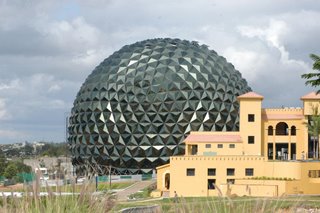 The skyline in this mini-city campus is dominated by a giant shimmering glass bubble and beside it is a moroccan style building in mellow yellow. This is a huge resort-like place which has swimming pools, restaurants, souvenir shops, gift shops, department store and also houses a Strand book stall.

Next stop was SDB1, Software Development Block One, a sleek and modern edifice facing the road; 650 Software Engineers carry on the development work for clients from across the globe.

Stepping out of the SDB1, the crimson and red hues of Sunset splattered in the sky was reflecting off the glass topped building and it seemed the building was surrounded by a golden red halo. Far across within the campus, a Tennis court, Helipad, the residential blocks and a floating restaurant stand among beautifully landscaped gardens. Grass, granite and glass seem to be the three main elements around which the entire architecture revolves. Not a speck of dirt could be seen anywhere; the roads were so clean that, a fellow visitor remarked, one could even sleep on it.

The entire campus is self-contained with a 2000 KVA generator, a water tank of 7 lakhs litre capacity, an affluent treatment & water recycling plant and an artificial lake with rain water harvesting incorporated.

World is once again at the door steps of Mysore after nearly half a century, and it is undoubtedly because of Infosys. I am a Mysorean, I feel proud. Thank you, Infosys.
Posted by H.S. Dharmendra at Saturday, November 11, 2006 1 comment: