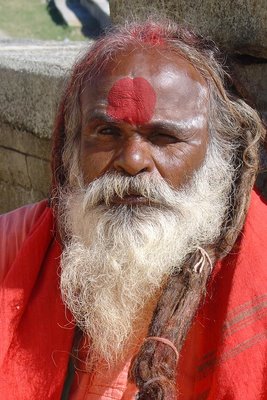 I had been to Chamundi hill recently to click some snaps. While I went around the temple I saw this old man with saffron robes, red uttareeya, matted braid fastened with rubber-bands, and a Santa-esque white beard. He had this biggest and roundest red bindi on his broad forehead which gave him a very attractive look. He was sitting in front of Sri Narayana Swamy temple and was having his brunch out of a stainless steel dabari.

I couldn't resist the temptation and requested him to pose for me. Without the slightest hint of annoyance, for being disturbed, he obliged and posed for me. I took a few snaps, one of which is displayed here. I call him, the 'Holy man of Chamundi'.
Posted by H.S. Dharmendra at Tuesday, March 28, 2006 3 comments:

Mysore to Srirangapatna in style

Since a couple of years I used to dread going to Srirangapatna. Invariably the travel was by road and the mere thought of it sent shivers down my spine. The widening and four-laning of the Mysore - Bangalore road was progressing at a snail's pace and all the ancient trees that flanked the picturesque road were sacrificed at the altar of progress. The road was dug up everywhere.

The Mysore - Bangalore Highway cuts through vast tracts of farm lands and lot of natural and manmade water bodies flow across it, at regular intervals, to quench these fields. So numerous small bridges have been built including a couple of huge bridges across river Cauvery. Redoing the entire road meant re-building these bridges too. So there were lot of traffic bottle necks at the bridges that were under construction.

Inspite of the dug up road, torned down bridges, the bottle necks, uprooted trees, huge potholes, littered boulders, maddening traffic, choking fuel fumes, etc., many a daredevils zipped through the pathetic thing that once used to be a shady, cool road, with least concern to themselves and their fellow road users.

But yesterday noon when I drove from Mysore to Srirangapatna, I felt like whistling all the way.

Yes, there are no more trees that once flanked a narrow road, but there is this beautiful four-lane road which has a central divider planted with bougainvillae, hibiscus, and other flowering plants. One need not stress himself thinking about the trucks and KSRTC buses hurtling towards from the opposite direction. The road is smooth and stylish (except at the couple of places where the major bridges across Cauvery are under construction). Feels good to drive. I agree that it is no match to the Delhi-Noida expressway that I got a chance to blaze through sitting at the back of the car a couple of years ago, but the new road certainly provides a faster connectivity to road users between Mysore and Bangalore.

Watch out Bangalore! Mysore has come closer to you...
Posted by H.S. Dharmendra at Tuesday, March 21, 2006 4 comments:

Review of the Book - Artists in Mysore 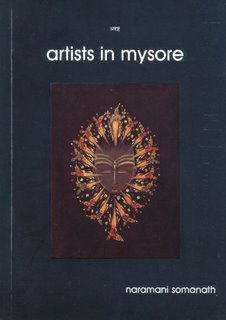 Artists in Mysore is a book authored by Naramani Somanath. As the title suggests the author has written on twenty-three artists of Mysore. The Majority of the artists featured are painters in various styles while a few marquetry artists, an avantgarde non-narrative film maker, two poets, a photographer and an architect are also featured. The author explores the respective art practised by each artist and also touches upon the various social and cultural aspects in relation to the artist, there by giving a commentary on their artistic lives without being categorical.

The selection of the artists is not deliberate but rather a random choice, says the author in his introduction. The book begins with K.S. Shreehari. Even though there are many artists painting in Mysore style, the author refers to Shreehari as being the last of our traditional Mysore school painters because he has learned the art in the same old traditional way from his father and grand-father as they did from their’s. The author disapproves other ways of learning this art which is mere copying.

Mysore is quite well-known for its marquetry tradition which is derived from the Italian renaissance. So the author has deemed it fit to include three artists who pratice this art. V.M. Sholapurkar, the former Dean of CAVA deals with marquetry in the sense of ‘modern art’. K. Mohan of Mandi Mohalla has been trained under the traditional masters of inlay and his pictorial marquetry is quite appealing to the author. Eric Sakellaropoulos, a greek, hails from Canada. He has set up a workshop in Mysore and producing marquetry pieces. He is almost renewing the aesthetic of pattern marquetry with his designs.

Vishnudas Ramdas and Raghuttama Putty, both senior artists are the pride of Mysore. Ramdas is an acclaimed portrait artist who has designed more than 35 gardens across India. His contribution to the horticultural architecture remains unknown for us Mysoreans. And as for Putty, he is the oldest living artist of Mysore who still paints at the ripe age of 92. He recently exhibited his landscapes on his 91st birthday.

Girija Madhavan brings a remarkable Japanese sensitivity to her work. She learned under many people around the world and each of her paintings is a masterpiece of vision, skill and sensitivity. Her mother, Mukta Venkatesh, wiled away her hundred years on the flowers of Mysore. Our city still has what must surely be the most beautiful flowering trees in the world. Mukta used to draw and paint flowers as a detailed study.

Two artists of Srilanka who have now adopted Mysore as their home are also featured in this book. Druvinka attended Shantiniketan and fell for the charms of Mysore which rarely stirs up any emotion in we Mysoreans. She paints in several layers of different colours, one upon the other, until the painting looks greyish with hints of colours, underneath, peeping through here and there. Her brother, Shehan Madawela who is residing here since 11 years, is inspired by the local women, the flowers, the food and the light. The faces in his paintings are stark and haunting.

G.L.N. Simha is an artist on his terms. He should be happy with his painting first before anyone else sees it or else the painting never sees the daylight again. The author understands the training tradition Simha has gone through and has made a brief study of this in the article.

M. Nagaraja Sharma is an archaeologist and a photographer. Along with him, the Venezuelan poet Rowena Hill and the wellknown poet Mudnakudu Chinnaswamy are featured in the book.

N. Sjoman, is an artist with a sense of humour and a Sanskrit scholar. A Canadian national, he is in love with Mysore for the past three decades. His works are personal statements and take a dig at the existing double standards in the society. He is a writer himself and has co-authored the book ‘Yoga Touchstone’ along with H.V. Dattatreya.

The only architect to be featured in the book, Shashi Bhooshan brought a new aesthetic to the otherwise languishing building architecture of Mysore which once boasted of lovingly built beautiful houses, buildings and palaces.

Though trained in a traditional idiom, Raghupati Bhatta has explored outside the tradition and has been successful in creating tiny worlds within the stifling spaces of narrow cards. Deft strokes of colours transform magically into forms and figures. One of his Visvarupa paintings grace the cover of the book.

N.S. Harsha is a rising star on the horizon of ‘modern art’ and Mysoreans hardly take stock of his creativity. He derives his aesthetics from Mysore, its creatures and contents. A student of CAVA, his paintings and installations are sought after around the globe.

Sami Vaningen is a contemporary art film maker who keeps returning to Mysore, the city where he grew up. Among his 15 films few were shot in Mysore. Another former Dean of CAVA to be featured in this book is Ramdas Adyanthaya. He paints from his experiences in life rather than from academic training.

Babu Eshwar Prasad is articulate about his art. You can read about him in his own words in the book. The article on Penpa Yaasel opens a whole new canvas of Tibetan thangkas. It also juxtaposes the two worlds of Tibetans - their life within Tibet and the other, without.

Pinki hails from the land of Madhubani and Mithila paintings. Her paintings are a mirror to her ecstasy during her creative trance. She is an artist for art’s sake and her art spills out of the canvas into her immediate physical world.

This book is a very informative one on artists in Mysore and a pleasure to read. It opens up a whole new perspective on an undisclosed world in Mysore. Every now and then Mysore, sort of, peeps out from the book and shows a stark fact about itself which the reader cannot ignore. It is as if a single thread of Mysore’s contemporary story is told through the lives of twenty-three artists. It’s like watching a TV with Picture-in-Picture facility - you are watching a channel, you switch on a small window in a corner of the monitor and take a peek at another channel as well. And when the reader finally turns the last page he yearns for more of Mysore and more artists.

One thing that the book really awakens, a regular Mysorean, to is the fact that there are so many artists enchanted with the city’s charm. They are unseen and unheard of. They remain in the background and work like shadows lurking in the dark deep recesses of the city.

In the beginning the reader may feel a little uncomfortable with the style of Naramani. He at times seems to wander off somewhere which is unconnected with the immediate context but when he returns to the original narrative the reader is surprised when that ‘stray-off’ blends so perfectly with the original context giving it a whole new meaning.

The book contains a picture of the work of each artist and at the back, there is a CD with additional pictures on it. Like this the reader can have a broad view of the work at a relatively low cost. This book, published by the Black Lotus Books Inc., Calgary, Canada, is a snapshot of arts of Mysore in the year 2006.
Posted by H.S. Dharmendra at Sunday, March 12, 2006 4 comments: